Core Memory Inside an IBM 1401 Mainframe

Really detailed and fascinating look at how memory was implemented back in the days of punch cards and room-sized computers.

The IBM 1401 mainframe computer was announced in 1959 and by the mid-1960s had become the best-selling computer, extremely popular with medium and large businesses because of its low cost. A key component of the 1401’s success was its 4,000 character core memory, which stored data on tiny magnetized rings called cores.

Each bit of data in memory is stored in a tiny ferrite ring or core. These cores can be magnetized in one of two directions, corresponding to a 0 or 1 bit. The cores are arranged into a grid of 4000 cores, called a plane. To select an address, an X wire and a Y wire are activated, selecting the cores where those two wires cross. 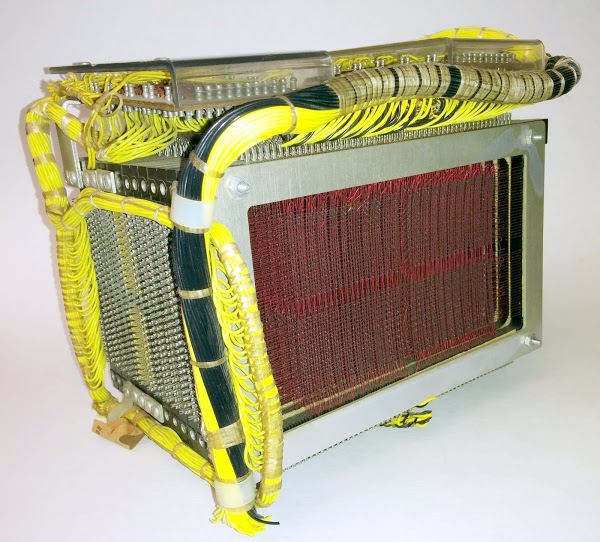 First, if a wire through a core carries a strong current, the core will be magnetized according to the direction of the current (following the right-hand rule). Current in one direction will write a 1 to the core, while the opposite current will cause the opposite magnetization and write a 0 to the core.

The final important property is that when a core switches its direction of magnetization, it induces a current in a sense wire through the core (kind of like a transformer). If the core already has the target state and doesn’t change magnetization, no current is induced. This induced current is used to read the state of a core. A consequence is that reading a core erases it, and the desired value must be written back to the core.

4 Labor-Intensive Crops For Robots To Harvest